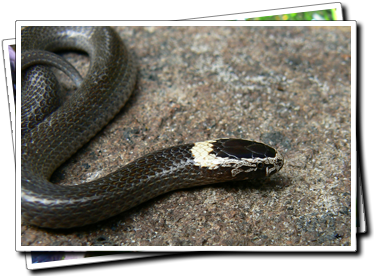 Not considered dangerous to humans. All crowned snakes are reluctant biters, relying more on bluff display than bite. They are weakly venomous and have tiny mouths and short fangs. They will generally rear up & 'mock strike' with mouth closed, more of a 'head butt'. If bitten, as with any snake bite, apply correct first aid and seek medical attention.

Secretive, nocturnal snakes. Hunts day-active skinks in leaf-litter at night while they are sleeping. Primarily terrestrial. Shelters by day in moist litter, under rocks, and logs.

Possibly the most abundant of Brisbane's smaller snake species. The most commonly encountered of the crowned snakes.