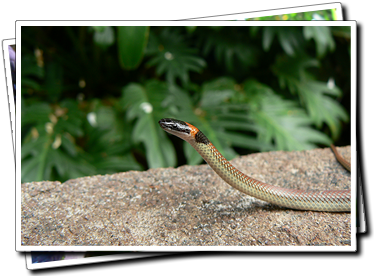 Virtually harmless and not considered significant. Weakly venomous but considered harmless due to inoffensive nature and reluctance to bite.

Small smooth snake with a reddish brown dorsal coloration. Individual scales appear outlined in black. Head has a distinct red spot enclosed in black extending over the entire head and down the neck. The underside of the head is white which extends into a white belly.

35cm but large specimens have been recorded at 40cm.