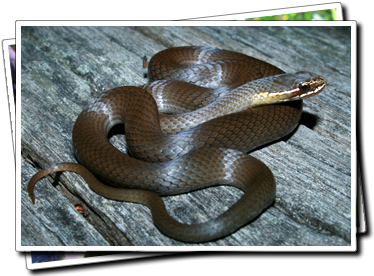 Bites from this species have been known to cause severe local symptoms such as pain & swelling, with more general reactions such as headaches and nausea also recorded. All bites should still be treated immediately and attended to with correct first aid.

Fairly uniform brown, olive or black above with dark grey or black belly surface. Two prominent narrow pale-yellowish stripes on each side of face, one running from snout, through eye and onto neck area, & one below eye running from snout to corner of mouth. In juveniles the head is often darker than the body. Scales smooth. Midbody scales at 17 rows.

Diurnal, although may also be active at night in hot weather. Shelters under rocks, sheets of bark and thick debris.

Found in a "moister" suburbs usually with riparian habitats nearby.

May be found in damp or moist gardens under timber, sheets of iron & foraging amongst thick vegetation.